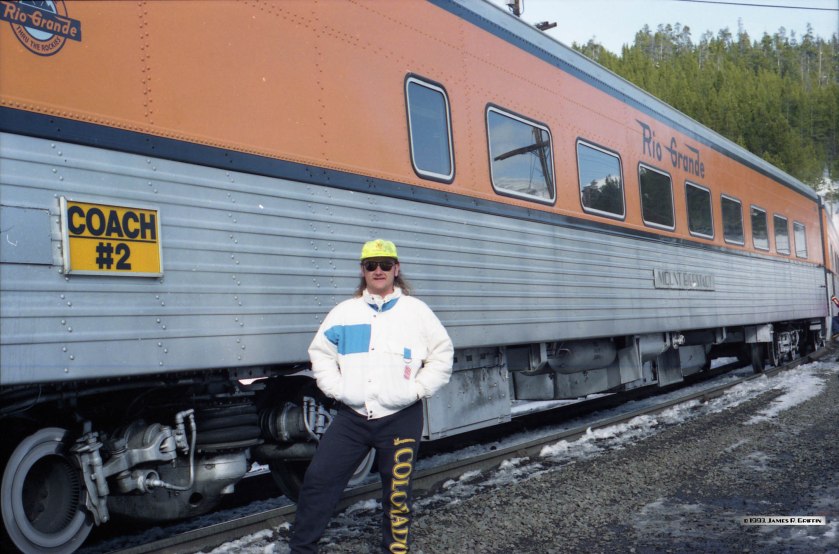 Have you ever experienced a perfect day?

I have had a few—a very few. Such days stand out in memory, especially as time passes. You find yourself revisiting them over and over. Of course, what defines “perfect” varies by the individual, and your perfect day and mine are probably quite different. Not oddly, as a hardcore railfan and nature lover, my perfect days often occur when those two elements intersect, made best when you have someone to share them with. Let me tell you about one such day.

It was March 14, 1993. We (I) had decided to take a trip on the Rio Grande Ski Train. This was an operation that ran between downtown Denver, up the former Moffat line through the Front Range, under the Continental Divide via the six-mile Moffat Tunnel, and terminating at the Winter Park ski area on the western side of the mountain. Most train lovers and many skiers are familiar with it. It’s actually a spectacular bit of engineering and the scenery is breathtaking, and I’d been anticipating this kind of trip for years. We had recently acquired two sets of used Nordic skis, and this seemed a great chance to try them out.

We lived in New Mexico but my parents were still in Boulder, so that solved the hotel issue—and the childcare issue as well. Accordingly, after arranging the tickets and making the journey to the folks’ place, we hit the hay early; 4:30 AM comes mighty early, after all. My dad provided us an alarm clock to make sure that we wouldn’t miss the train. I should have known better; I had forgotten that man had a history of pranks with such devices. Picture a mechanical alarm with those two bells on the top, and you get the idea. It was the alarm clock from HELL! I still remember bolting from bed and grasping it with one hand trying to deaden the little oscillating hammer while trying to figure out how to turn the dang thing off in the dark! No problem with being awake, let me tell you. I think it gave me a blood blister too. Makes my heart race just thinking about it!

Fortunately the rest of the pre-trip activities were uneventful, and my wife and I were all checked in at Union Station by about 6:30. No harm being early. Walking through the tunnel and out onto the platform I got my first real look at the train, and it made my li’l train-loving heart go pitter-patter. Our seats were on the second coach, which bore a nameplate in art-deco lettering that said MOUNT BIERSTADT. We boarded and settled in, which meant that I was bouncing around like a kid on Christmas morning. Not long after, the train nudged into motion and crept out of the station headed through Denver’s rail yards and into the endless suburbia at increasing speeds.

As an aside, “endless” is a figure of speech, and in 1993 that end actually came a lot sooner than it does today! 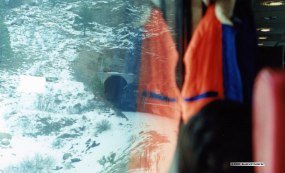 Soon enough, we got to the part of the ride that made the trip what it is: the ascent and penetration of the Front Range. For those unfamiliar with it, this involves 28 railroad tunnels of varying lengths and miles of cliff-hanging trackage. First, one is treated to a vast vista of the Colorado plains, followed by an anticipatory look ahead at the Divide. After an hour of this the train charged into the 6.2-mile Moffat tunnel, and twelve minutes later decelerated and emerged into the blinding light at the base of the Winter Park ski resort, where the train halted to disgorge its 700 passengers.

Our day involved cross-country skiing at the Idlewild Nordic facility, which at that time was located on the east side of the town of Winter Park. Catching one of the free shuttle buses, we got to our destination with ease and had soon strapped on the boards for our morning of, well, sweating inside our parkas, frankly. It was a beautiful sunlit day with brilliant blue skies, and the snow was perfect. We weren’t particularly good at cross-country skiing, but that didn’t keep us from having a great time.

After a couple of hours, we were working our way down a snowy road in the forest when we spotted a pair of moose ahead in the deep snow! I’d never seen moose in the wild, and here were two of them just a couple hundred feet away. Hastily I stabbed my poles into the snow and pulled out my 35mm Minolta (Remember, this is in the pre-digital days, as well as pre-internet.) My only lens was a fixed 50mm, so I started ski-walking down the road to get closer. I was about halfway to the pair when suddenly the larger of the two—a female—started making aggressive movements. Fortunately she was having trouble getting traction. And right here—very belatedly—I recalled to mind all those stories I’d heard of people being trampled by moose.

Yes, I halted and surveyed.

This was a mama with a juvenile calf! And she was, shall we say, displeased at our presence.

After snapping another photo—why die for nothing?—I carefully beat a retreat and left mama and junior to their own devices.  But we were slow learners, and carefully followed them down the road for a bit.  Fortunately they were content to slowly amble off and allow us leave under our own power. 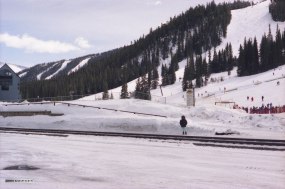 Well, we survived the moose encounter and the return to headquarters. It being lunchtime we headed back to US 40 (Main Street) and had a great burger at the Swiss Haus, then caught a bus back to the resort. There I was, at the west portal of the Moffat Tunnel, with time and a camera. What to do, what to do?

Funny thing about the Moffat: if you look into the portal hard enough, you can see the headlights of any approaching train that has passed the apex, about 3 miles in. I hadn’t been watching very long when I was rewarded by such a sighting. A few minutes later a grungy gray-and-red locomotive emerged, on the point of the westbound Amtrak train. I snapped a few frames as the train roared past me 20 feet away. It was a lumbering freight locomotive leading the passenger train, which was hours late; I’m sure there was a story there, but we’ll never know what it was. 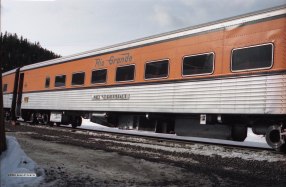 Not long afterwards, the Ski Train returned up the hill, having been turned around and pointing the right way to go home. I took more photos of the equipment, and we boarded in plenty of time to get settled in for the ride back to Denver. Being March, it stayed light for the entire return, so the downhill ride was just as scenic as the ride up.

Back then the Ski Train had a coffee bar on every other car, and if you purchased one of their ceramic cups you could get free refills all day. Evidently I made enough return trips to the snack counter that the woman volunteer commented, “Looks like you have somebody you’re trying to keep awake tonight,” accompanied by a suggestive smile that frankly startled me. (Did I mention we were staying at my parents, with kids? ‘Nuff said!) But we still have that cup, and three others from subsequent trips.